Yes it does, but we don't see it around us. 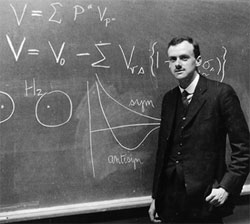 Paul Dirac was the brilliant young physicist who first proposed the existence of antiparticles. Image © AIP

The 'case file' for antimatter was opened in 1928 by physicist Paul Dirac. He developed a theory that combined quantum mechanics and Einstein’s special relativity to provide a more full description of electron interactions. The basic equation he derived turned out to have two solutions, one for the electron and one that seemed to describe something with positive charge (in fact, it was the positron). Then in 1932 the evidence was found to prove these ideas correct, when the positron was discovered occurring naturally in cosmic rays.

For the past 50 years and more, laboratories like CERN have routinely produced antiparticles, and in 1995 CERN became the first laboratory to create anti-atoms artificially. But no one has ever produced antimatter without obtaining the corresponding matter particles also. The scenario must have been the same during the birth of the Universe, when equal amounts of matter and antimatter must have been produced in the Big Bang.

Gateway to a mystery

Such questions have led to speculative theories, from a break in the rules that govern the Universe to the existence of an entire anti-Universe somewhere else! The way to solve the baffling disappearance of antimatter, and to learn more about this substance in general, is by studying both particles and antiparticles to find and decipher the subtle clues.

Does CERN create black holes? Is this dangerous?

God particle? Bosons? Peter Higgs? What is all this?