The creation of black holes at the Large Hadron Collider is very unlikely. However, some theories suggest that the formation of tiny 'quantum' black holes may be possible. The observation of such an event would be thrilling in terms of our understanding of the Universe; it would also be perfectly safe.

Black holes form in space when certain stars, much larger than our Sun, collapse on themselves at the end of their lives. They concentrate a very large amount of matter in a very small space. They are so dense that the gravity they exert is such that not even light can travel out of them.

Speculations about black holes at the LHC refer to particles produced in the collisions of pairs of protons. These are microscopic - or quantum - black holes. Scientists are not at all sure that quantum black holes exist. 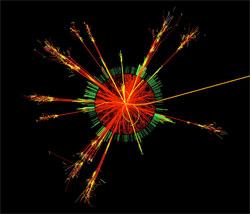 A simulation of a quantum black hole detected by the ATLAS experiment, before it decays via a process known as Hawking radiation.

The physical part of the LHC experiments - colliding particles - happens in nature all the time. We know, for example, that the Earth is constantly bombarded by cosmic rays: when cosmic rays hit the atmosphere, particles are colliding with one another in much the same way as in the collisions planned at the LHC.

Just as we know that the Earth is safe under the natural bombardment from cosmic rays, so we know that recreating these collisions poses no threat to the Earth. Nature’s collisions also reach much higher energies than those at the LHC.

What if collisions at the LHC produced a black hole?

The creation of a quantum black hole at the LHC would be very surprising, but very exciting indeed. It would allow physicists to learn about nature’s most elusive force – gravity.

Remember: particle collisions happen all the time in nature, and we're all still here. If you would like to read up more on the safety of the LHC, there is more information here.

What would be the significance of the creation of a black hole at the LHC?

The creation of a black hole at the LHC would confirm theories that our universe is not 4 dimensional (3 space plus 1 time dimensions), but indeed hosts other dimensions. It would be quite a spectacular philosophical outcome! In the same way that the theory of relativity or of quantum mechanics revolutionized our way of thinking, discovering the existence of extra dimensions would be a major new milestone in our understanding of the Universe.

There is no obvious application for knowing this. Many people will start speculating about using these extra dimensions for space and time travel, or as a source of clean energy, and who knows what else. It is rather tempting to compare it to the discovery of magnetism by the Phoenicians who could not foresee that electricity and magnetism would completely reshape modern life...

Does CERN create black holes? Is this dangerous?

Matter's secret twin? This sounds like science fiction - is it?