The term 'The God particle' was coined by the physicist Leon Lederman in his 1993 popular science book, The God Particle: If the Universe Is the Answer, What Is the Question? The particle that the book title refers to is the 'Higgs boson'.

The particle we now call the Higgs boson has never been observed. First hypothesised in 1964, the Higgs boson, if discovered, would be a vital missing piece of the model that physicists use to describe elementary particles and their interactions: the Standard Model.

What is the Higgs boson?

The theories and discoveries of thousands of physicists over the past century have resulted in a remarkable insight into the fundamental structure of matter: everything in the Universe is found to be made from twelve basic building blocks called fundamental particles, governed by four fundamental forces.

Our best understanding of how these twelve particles and three of the forces are related to each other is encapsulated in the Standard Model of particles and forces. Developed in the 1960s and 70s, it has successfully explained a host of experimental results and precisely predicted a wide variety of phenomena. Over time and through many experiments by many physicists, the Standard Model has become established as a well-tested physics theory. 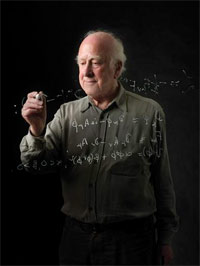 In the 1960s physicists began to realize that there are very close ties between two of the four fundamental forces between elements: the weak force and the electromagnetic force. The two forces could be described within a unified theory, which forms the basis of the Standard Model. This unification implies that electricity, magnetism, light and some types of radioactivity are all manifestations of a single underlying force called the electroweak force.

However, in order for this unification to work mathematically, it requires that force-carrying particles have no mass. We know from experiments that this is not true. Physicists including Peter Higgs, Robert Brout and François Englert came up with a solution to solve this conundrum.

They suggested that all particles had no mass just after the Big Bang. As the Universe cooled and the temperature fell below a critical value, an invisible force field which became commonly know as the 'Higgs field' was formed together with the associated particle, now called the 'Higgs boson'. The field prevails throughout the cosmos: any particles that interact with it are given a mass via the Higgs boson. The more they interact, the heavier they become, whereas particles that never interact are left with no mass at all.

This idea provided a satisfactory solution and fitted well with established theories and phenomena. The problem is that no one has ever observed the Higgs boson in an experiment to confirm the theory. Finding this particle would give an insight into why certain particles have mass, and help to develop subsequent physics.

However, we do not know the mass of the Higgs boson itself, which makes it more difficult to identify. Physicists have to look for it by systematically searching a range of mass within which it is predicted to exist. The yet unexplored range is accessible using the Large Hadron Collider, which will determine the existence of the Higgs boson. If it turns out that we cannot find it, something else will appear that does the same job. Either way, our knowledge of the Universe will advance.

What does the Higgs boson have to do with God?

The Higgs boson has nothing to do with God. It was simply a snappy term to illustrate the ubiquitous effect of the Higgs field, and its importance in determining mass.

Matter's secret twin? This sounds like science fiction - is it?