How is antimatter contained?

It is very difficult to contain antimatter. Any contact between a particle and its anti-particle leads to their immediate annihilation: their mass is converted into pure energy. To contain anti-particles, therefore, you have to isolate them from all particles. 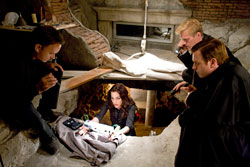 Portable antimatter traps, as seen in the movie, are not feasible in reality.

However, particles of the same charge repel each other, so the more particles that are contained in a trap, the more energy is needed to power the magnetic field that contains them. It is not currently possible to store a significant quantity of antiprotons.

For electrically neutral anti-particles or anti-atoms, the situation is even more difficult. It is impossible to use constant electric or magnetic fields to contain neutral antimatter, because these fields have no effect on the particles at all. Scientists are working on ideas to use ‘magnetic bottles’ (with inhomogeneous magnetic fields acting on the magnetic moment), or ‘optical traps’ (using lasers) but this is still under development.

God particle? Bosons? Peter Higgs? What is all this?

How is antimatter contained?

It is very difficult to contain antimatter. Any contact between a particle and its anti-particle leads to their immediate annihilation...