We don't find antimatter around us; in order to study antimatter it has to be made.

When enough energy is squeezed into a very small space, such as during high-energy particle collisions at CERN, particle-antiparticle pairs are produced spontaneously. The energy given to the accelerated particles has to be at least equivalent to the mass of the new particles in order for this to occur; the more energy that is put into particle collisions, the more massive the particles and antiparticles that can be produced.

When energy transforms into mass, both matter and antimatter are created in equal amounts.

This is a computer-generated image of an actual antihydrogen annihilation in the ATHENA experiment at CERN in 2002. The antiproton annihilation produces four charged particles (yellow lines) that register in the detector (yellow and pink blocks). The positron annihilates to produce back-to-back gamma rays (red). » larger version

Antimatter is produced in many experiments at CERN. In collisions at the Large Hadron Collider the antiparticles that are produced cannot be trapped because of their very high energy - they annihilate harmlessly in the detectors. The Antiproton Decelerator at CERN produces much slower antiprotons that can be trapped. These antiprotons can then be studied to explore questions such as: do antiparticles fall upwards?

At CERN, protons with an energy of 26 GeV (about 30 times their mass at rest) collide with nuclei inside a metal cylinder called a target. About four proton-antiproton pairs are produced in every million collisions. The antiprotons are separated from other particles using magnetic fields and are guided to the Antiproton Decelerator, where they are slowed down from 96% to 10% of the speed of light. They are ejected and run through beam pipes into experiments to be trapped and stored. 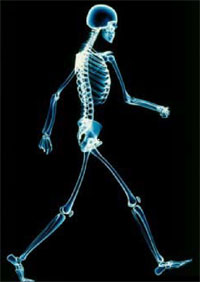 The body of a person weighing 80 kg emits 180 positrons per hour! This comes from the decay of potassium-40, a naturally occurring isotope that is ingested by drinking water, eating food and breathing.

Even if CERN used its accelerators only for making antimatter, it could produce no more than about 1 billionth of a gram per year. To make 1 g of antimatter - the amount made by Vetra in the movie - would therefore take about 1 billion years.

The total amount of antimatter produced in CERN’s history is less than 10 nanograms - containing only enough energy to power a 60 W light bulb for 4 hours.

The cost of antimatter

The efficiency of antimatter production and storage is very low. About 1 billion times more energy is required to make antimatter than is finally contained in its mass. Using E = mc2, we find that 1 gram of antimatter contains:

Taking into account the low production efficiency, it would need 25 million billion kWh to make one single gram! Even at a discount price for electric power, this would cost more than a million billion Euros!