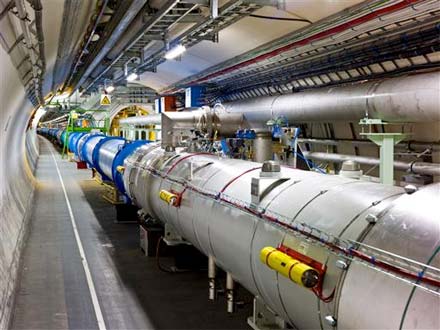 View of the LHC machine in the tunnel

Physicists cannot see the particles that they study - they are simply too small. But how do you study something that is too small to see?

Imagine you are looking up at a blue sky on a summer's day: you see a vapour trail high up, but you cannot see a plane; you know that there is a plane in the sky from the trail it leaves, even if you cannot always see it. In the past scientists would photograph liquid hydrogen under pressure as particles passed through it: the photographs would reveal trails of bubbles that marked the paths of particles - like a plane's vapour trail in the sky. Today physicists have very sophisticated detectors that work more like digital cameras and send data of the trajectory, charge, and energy of particles directly to computers.

The Large Hadron Collider is the world's most powerful particle accelerator. As its name suggests, its job is to collide particles together. To do this, beams of hadrons (either protons or lead ions) will be accelerated in opposite directions around a vast (27km) underground machine at nearly the speed of light before being smashed head-on with one another at very precise points. Vast detectors surround these points to measure what happens during these collisions.

At this scale and with these energies, what is observed can be very strange and exciting. As Einstein's famous equation tells us, matter is a very concentrated form of energy. In other words, matter and energy are interchangeable. These collisions can help reproduce conditions shortly after the Big Bang, giving us both knowledge of the subatomic world and understanding of our vast universe.